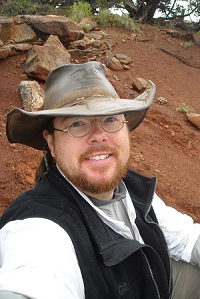 Dave Lovelace is a vertebrate paleontologist specializing in Triassic-aged rocks of the Rocky Mountain West (252-201 million years ago). He joined the UW Geology Museum team as a research scientist after completing his PhD at UW-Madison’s Department of Geoscience in 2012. Dave combines the study of ancient bones, trackways, and soils to build a picture of what ecosystems looked like 230 million years ago — when the first mammals, turtles, crocodiles, lizards, dinosaurs, and birds evolved. Since becoming a member of the museum team, Dave had made several exciting discoveries including: the oldest known turtle tracks in the world, two mass-death-assemblages of Late Triassic amphibians, and the oldest dinosaur tracks in Wyoming.

Your presentation was excellent. You did such a good job relaying a rather complex subject to a bunch laymen…. You are certainly an expert in your field of expertise and also bird anatomy. – Kevin D., Lakeland Audubon Society